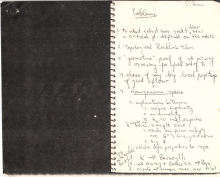 Regarding a): if Gamma is

Regarding a): if Gamma is cocompact, it is clear that unique ergodicity implies minimality. If Gamma is nonuniform this implication is false, as was shown in an example of Raghunathan described in my paper "Finite dimensional representations and subgroup actions on homogeneous spaces," Israel Journal of Mathematics, 106 (1998). The implication mimimality => unique ergodicity was proved in my paper with Mozes, "Minimality and unique ergodicity for subgroup actions," Annales de l'Institut Fourier 48, 5 (1998), but we had to assume that the acting group was algebraic and that G is semisimple. These assumptions were later relaxed in work of Starkov, which is described in his survey paper with Kleinbock and Shah in the handbook of dynamical systems.

Regarding d): this was proved by Dani in "Kolmogorov automorphisms on homogeneous spaces", Amer. J. Math. 98 (1976), under the assumption that G is semisimple and the acting group element is diagonalizable over C.

My memory is that stable

My memory is that stable ergodicity among perturbatins by left translation for affine dynamics on homogenous spaces is equivalent to unique ergodicity of the unstable foliation. But I don't remember why I think this. There is a characterization by Starkov,A., Stable Ergodicity Among left Translations, appendix to Pugh,C. and M.Shub, Stable Ergodicity, Bull.AMS (41) 1-41.