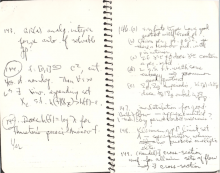 In parts a and d, "good quotient" probably means something like the quotient dynamical system is expansive or hyperbolic and the quotient mapping is finite-to-one or 1-1 a.e. (w.r.t. any fully supported ergodic measure). In both a and d, it is too much to expect an SFT quotient; how about a sofic quotient? See [1] and [2].

In part e, by aperiodic he means mixing. Assuming a condition on the numbers of periodic points, Krieger [3] proved existence of such an imbedding. See also [4].

a.
Kitchens (a Bowen grandson) showed there are mixing shifts of finite type with no equal entropy SFT factor with a fixed point. See e.g. Example 4.2.12 of Kitchens' book [1].

Every shift of finite type has an equal entropy sofic quotient with a fixed point. (Form the quotient system by collapsing a single finite orbit to a point, and identifying no other points.)

I don't know whether every mixing SFT has an equal entropy quotient with canonical coordinates (local product structure) and a fixed point.

b. A periodic point $p$ in the interior has a unique preimage in the covering SFT.  An answer ``no'' to this question would reveal  interesting nonhomogenity of the
map on the basic set, and the zeta function counting such $p$ (if they exist) would be an interesting invariant.

c. The paper [2] should be relevant to this question.