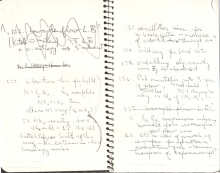 A zeta function for Smale

A zeta function for Smale flows that counted twisting in the local stable manifolds of closed orbits was developed in my paper [1]. It only worked when all the twisting was in the same sense. There exist Smale flows where infinitely many closed orbits have the same twist. Followup papers [2,3,4] got around this but the invariant was no long a function but an element of the group ring ZZ/2. It generalizes the Parry-Sullivan number (that's Denise Sullivan). It is not known if this new invariant is commutable in general. A joint paper with Mike Boyle [5] showed the problem to be equivalent to the unsolved problem of classifying square matrices over ZZ/2 - which is not a PID ring. See also [6].